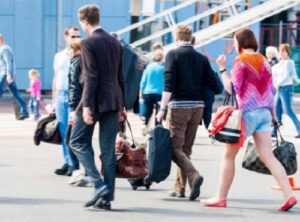 The topic of labor migration of Ukrainians has been relevant for more than one year. Our compatriots go to work abroad: some only to earn money, some for the sake of the prospect of staying in another country, some guided by other motives. But in any case, the migration process is not complete without difficulties and issues that migrants have to solve. The survey showed that among the respondents, 29% had to work abroad, while 71% had never worked outside the country.
People who have worked abroad, among the main difficulties, most often named separation from family and friends (38%), language problems (35%) and difficulties with paperwork (32%). Those who have not yet worked abroad are mainly afraid of difficulties in understanding a foreign language, potential problems associated with finding a job and processing documents – 53%, 41% and 37%, respectively. More detailed information on other difficulties encountered and feared by labor migrants can be found in the graph below. Among the difficulties indicated in the “Other” category, the respondents noted: longer working hours, skeptical attitude of residents of another country towards migrants, difficulties in trusting an employer.
Among those with work experience abroad, 27% worked on a long-term contract, 23% went to seasonal part-time jobs, and one in ten participated in programs that provide students with work abroad during vacations. Moreover, one fifth of the respondents worked abroad at the time of the survey. Among the answers in the “Other” category, respondents named: permanent residence, remote work under local (not Ukrainian) legislation, work under short-term contracts and projects, work in the framework of exchange of experience between offices of one company in different countries.
Among the reasons why people decide to go to work abroad, the most mentioned were the opportunity to earn much more there (58%). The lack of decent work in the region of residence stimulated 37% of the respondents to go to work in another country. Due to family / personal circumstances, virtually every fifth respondent left Ukraine. 17% said they started working abroad in response to an offer from a new employer. Every tenth considered it necessary to gain experience of work abroad for the sake of their further professional development. Within the company, only 2% of respondents had a transfer to a foreign office. Other reasons for labor migration were both positive (the opportunity to acquire new skills and qualifications) and negative reasons (the crisis in the country, lack of trust in Ukrainian employers).
Thus, among the main reasons for labor migration, which were named by respondents who took part in the survey, are the chance to earn more and the lack of opportunities to find a decent job in Ukraine. The survey participants noted that they travel to work abroad both on long-term contracts and for short periods. Both those who have worked abroad and those who have no such experience understand that labor migration is accompanied by certain difficulties. The most common difficulty for those working abroad is separation from family and friends. Whereas people who have no experience of labor migration believe that problems with finding a job and insufficient knowledge of the language can often be problematic. In general, the language barrier as one of the fairly common problems in labor migration is noted by those who have experience of working abroad.